Athens city centre is made up of small neighbourhoods, which are quite different in their style and appearance, but nonetheless, are located quite close to each other. What’s more, most of the major attractions are located amongst a small cluster of areas centring on Syntagma Square and under the shadow of the Acropolis. 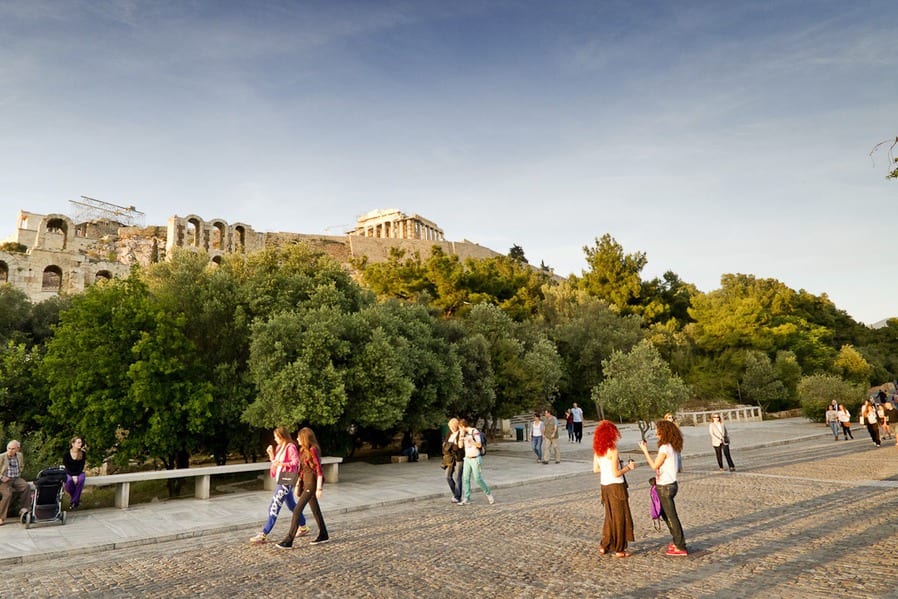 This means that walking is likely to be your primary mode of transport. And in Athens you’ll be happy for this. Picture strolling under the shadow of terracotta-roofed buildings, interwoven with mulberry and citrus trees, bright flowers at every turn and the smell of great food from each taverna or restaurant you pass.  A 20-minute walk through the historic city centre- Plaka- connects the foothill of the Acropolis and the new Acropolis Museum to Syntagma Square and Greece’s parliament. 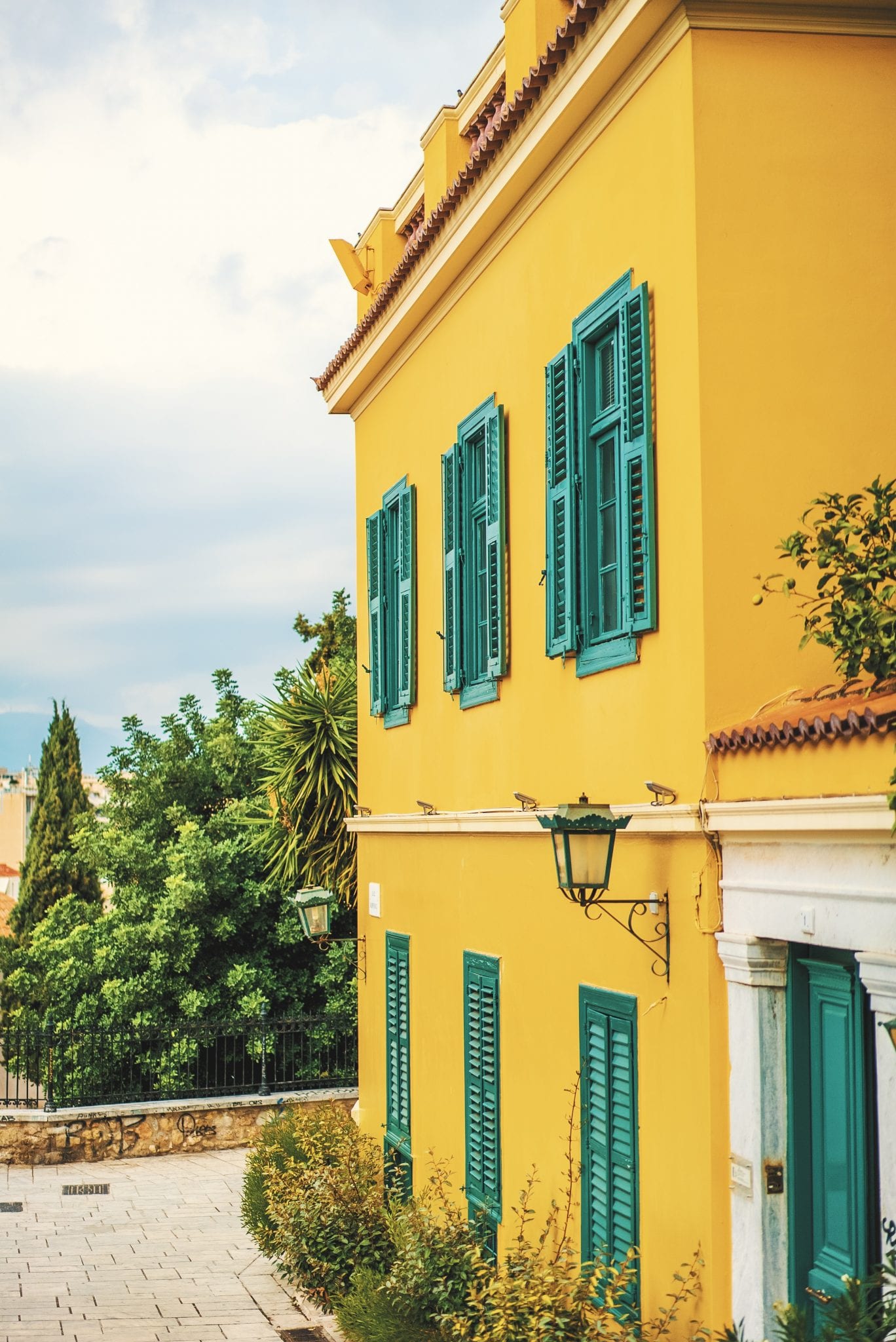 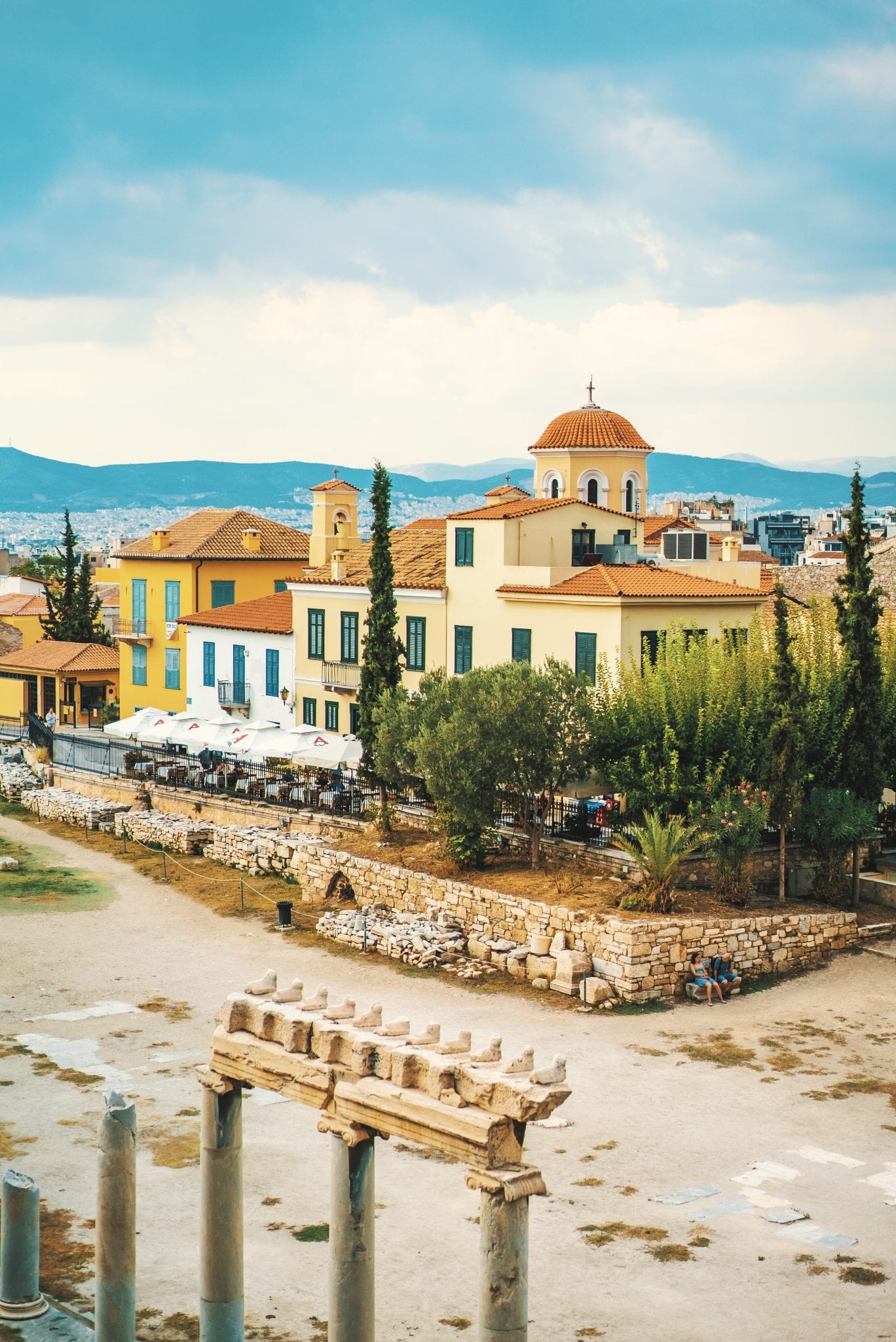 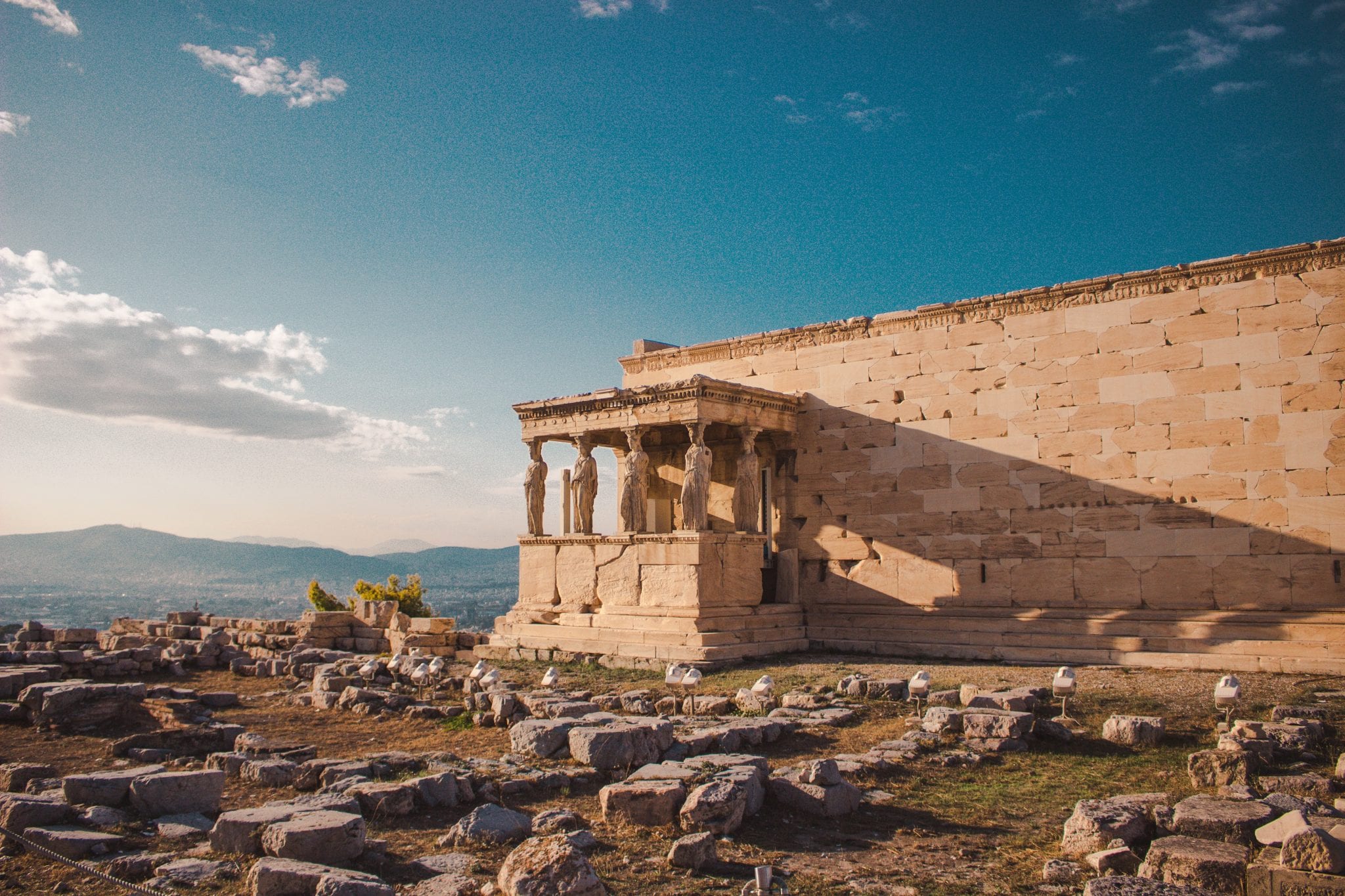 “Karyatides” from the Acropolis in Athens

Underneath the city of Athens is the metro system. This is one of the best metro services in Europe, with clean and bright carriages that are air-conditioned to take the edge off the hot sun above. Using the metro in Athens is one of the cheapest and quickest ways to get around the city. You save time and miss the city traffic during the day. 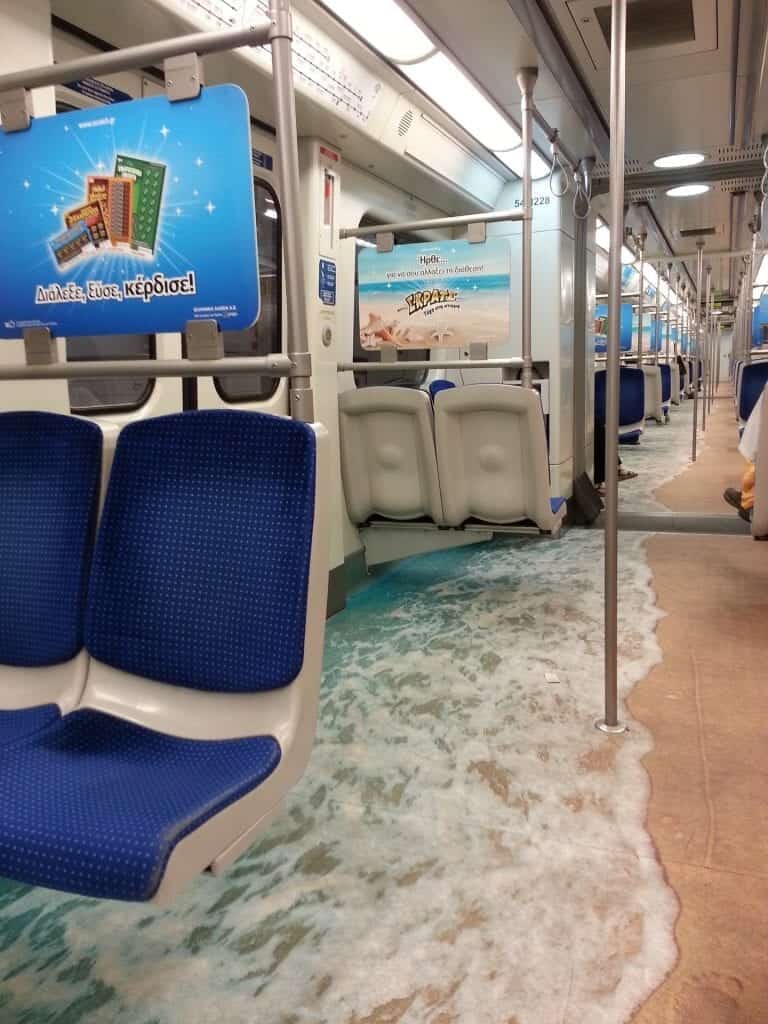 The metro is very simple, consisting of only 3 lines: Green (1), Red (2) and Blue (3). Line 1 runs from the port of Piraeus through to Kifissia via Monastiraki. Line 2 from Elliniko in the south through Acropolis and Syntagma to Anthoupoli. Line 3 connects in the east with the Airport and runs into the centre, Syntagma Square and continues on to Aghia Marina.

If you’re wanting to visit somewhere a bit further out- such as the National Archaeological Museum- the metro is the most straightforward way to visit; Take the M1 Green Line from Monastiraki or the M2 Red Line from Syntagma or Akropoli, and getting off at the Omonoia station. You will then leave through the ‘3rd September’ exit and walk around 700m to the museum. Using the Athens Metro to access the city’s main historical sites is also one of the best ways to see more in less time, ensuring you don’t miss out on any of the amazing sites in Athens. To reach the famous Acropolis or the Acropolis Museum, you can take the M2 Red Line to the Akropoli station. The ruins are some steps away from the station entrance.

Also, at the metro stations are the ticket machines (and ticket staff) where you can purchase your all transport Athena Ticket. This will be necessary for the metro, as well as suburban trains, buses, trolleys and the tram. It’s wise to get a multi-journey ticket at a peripheral station as the central station machines can have long waiting queues. 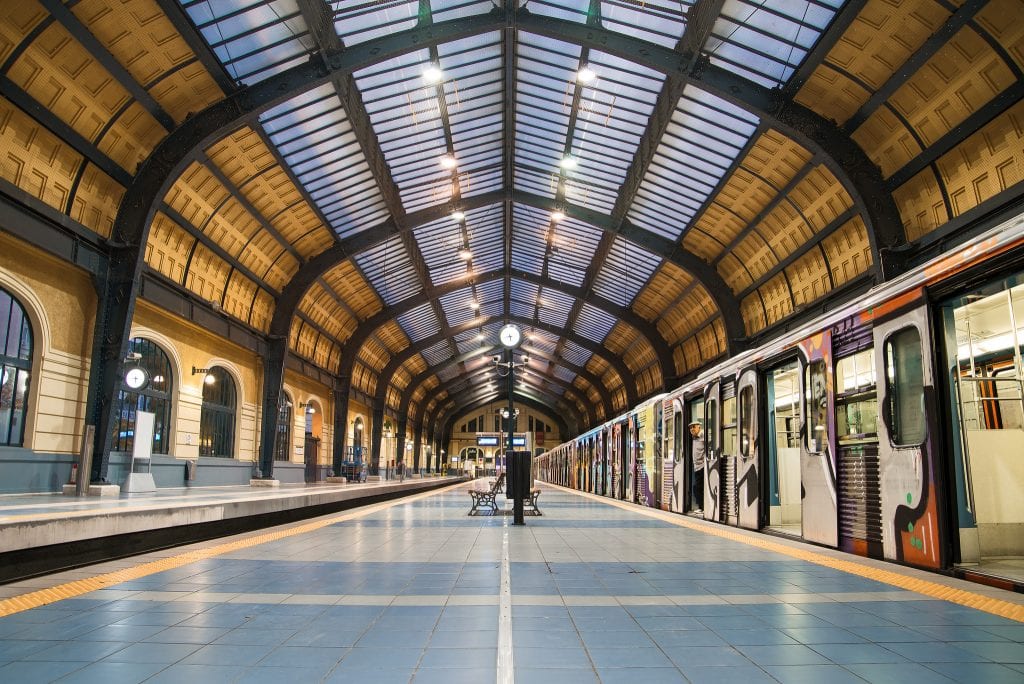 Using the Bus in Athens

A common site throughout Athens are the blue & white city buses and the yellow trolleys. These form a network that runs through the city centre and serve the outer city. The new buses can be air-conditioned and have an onboard monitor that shows you the direction of travel and the stops. However, this isn’t something to rely on as the buses are often old and in poor condition. Your best bet, if you want to take the bus, is to listen out for the stop you need or ask someone if you’re not sure (Greeks are very kind and helpful people, and the younger society members have good English comprehension).

The stops are often fixed with a live monitor to inform you when the bus is due to arrive, but don’t expect this to be completely accurate, as Athens traffic is not always predictable. Some routes you might use are the 040 from Syntagma Square to Piraeus, the 10 from Makrigianni to Megaro or the 060 from the National Garden to Exarchia.

A leisurely way to experience the coast of Athens and the beautiful cafes or bars that stud the shining blue’s coastline is to take the city tram. There’s a total of 3 routes, having two routes that start in Syntagma Square- towards the suburb of Vouli or the Peace and Friendship Stadium- and the last running up and down the coast between these points. The tram is in the process of further development to extend out to Piraeus. Whilst the tram is a slower ride, the carriages are all modern with air conditioning and clean, similar to the metro. If you’re wanting to get to the Athens riviera or try the high-class shops in Glyfada, this is the most leisurely way to get there.

If you’re in a rush or public transport happens to be on strike, you’ll never be far from one of the many bright yellow taxis in Athens.

Looking similar to the New York taxis of the films (you’ll notice them first thing from leaving the airport). Costing around 5 euros for a 10-minute trip, this can be a good alternative to fall back on if your legs are tired and your brain full from all the history around you. 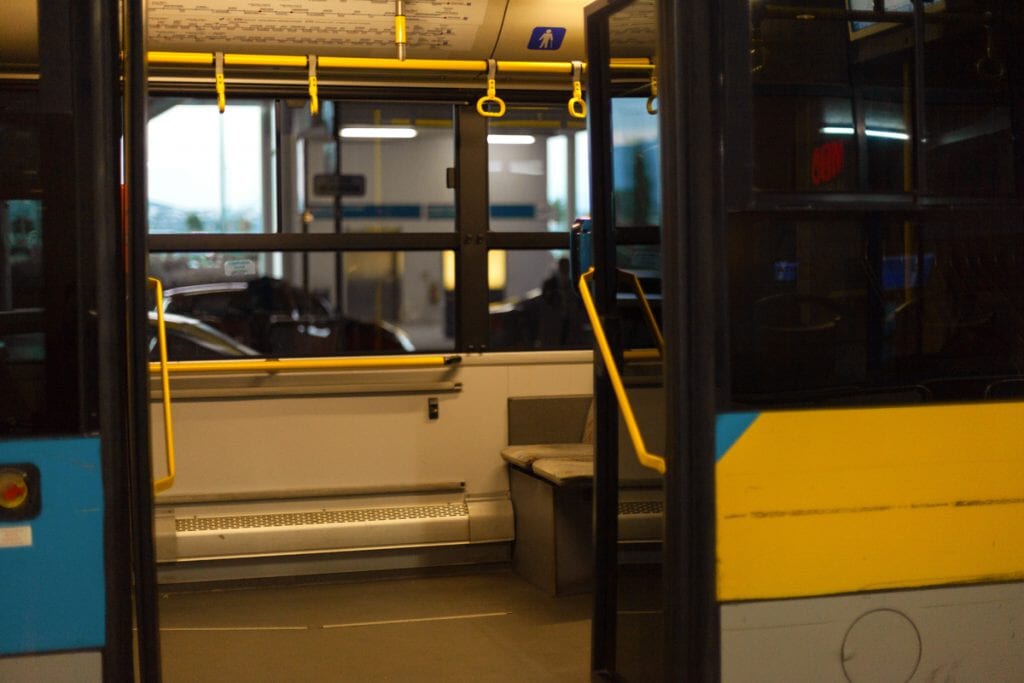 Interior view of a public bus 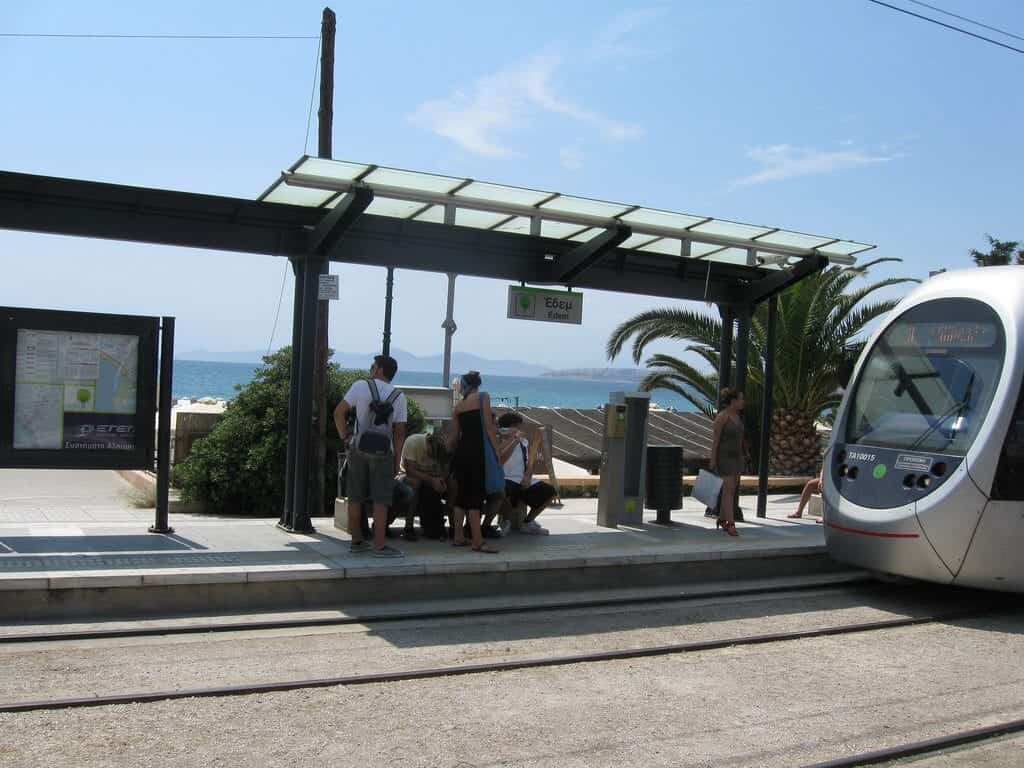 Private Athens Airport Transfer with Flat Price
If you like the sound of a taxi taking you around personally and emphasising for you the historical sites you want to see most, alongside some local insider tips, then we have just the deal for you. With your Welcome driver who’ll pick you up from the airport, you can pre-arrange to have an exclusive city tour with them to your taste. Just let us know when you make your booking or anytime during your stay! Whatever way you choose to get about, as we say in Athens, “kalo dromo”! 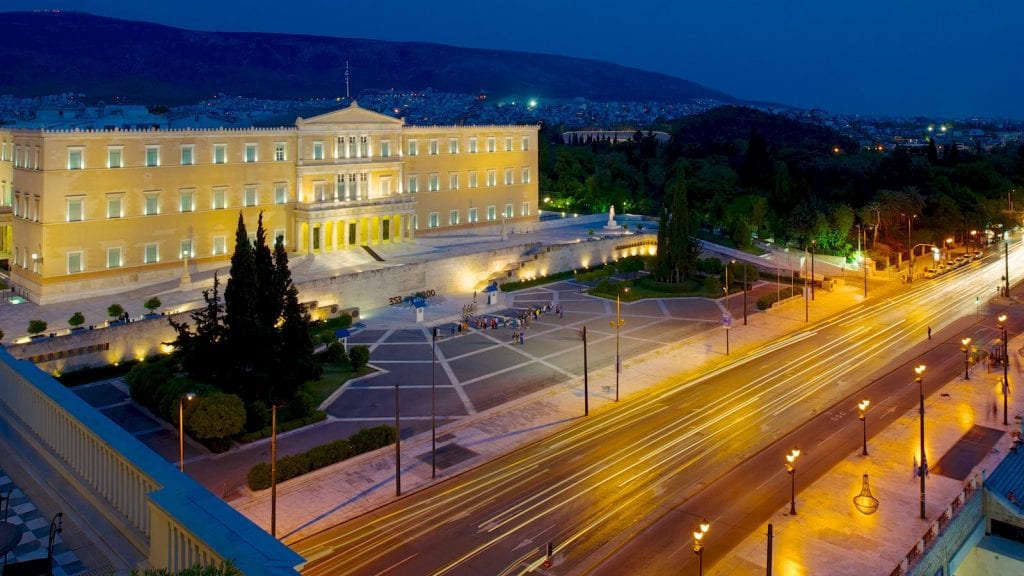 6+1 Museums in Athens that you have to visit!

Learn about the rich cultural history of Athens, through the exquisite museums dedicated to maintain Greek history. The most must-visit Museums in Athens!

Exploring Athens by Night as a Local

Fall in love with Athens on a personalized Welcome evening tour of its famous sites and illuminated landmarks.