There are three ways to get from Kayseri Erkilet Airport to Kayseri city centre in Cappadocia: taxi, bus, and shuttle bus. A Cappadocia airport taxi from Kayseri Airport to Kayseri city centre usually takes 20 minutes under average traffic and the taxi fare for up to 4 passengers can range from €10 to €25 (132TL-164TL) depending on the taxi provider. There is also a public bus option to Kayseri city centre in Cappadocia. Bus 100 from Kayseri Airport leaves from the Airport Terminal Monday to Sunday 6.40am – 11.30pm and a single ticket is less than €1 (6.6TL). Journey duration is 25 minutes. There is also a shuttle bus option to Cappadocia. Shuttle bus tickets are €2 (12TL) and shuttle buses of various companies leave from the airport depending on the times of ASR flight arrivals. The journey takes 20 minutes approximately.

Welcome Pickups offers meet and greet services and a friendly introduction to Cappadocia at the same price as a regular taxi. Click here to see the cost.

How to get from Kayseri Airport to Cappadocia (Kayseri) by taxi

Taxis at Kayseri Airport (ASR) run 24/7 and you can either prebook a ride or get one at the airport. The ride to Cappadocia in the city of Kayseri takes around 20 minutes and the average fare is €18 (120TL) for 4 people. Prebooked services tend to be more expensive, but they offer a fixed fare and different amenities such as personalised pick-up and flight delay guarantee.

Under normal traffic, a ride from Kayseri Airport to Kayseri city centre in the Cappadocia region will cost around €18 for a ride with up to 4 passengers. Prebooked services tend to be more costly than typical airport taxis, but they offer a fixed fare and other pre-ride amenities.

*During busier times, it can take more than 30 minutes for a taxi ride to Cappadocia (Kayseri).

You can ride a taxi 24/7 at Kayseri Erkilet Airport in Cappadocia.

Taxis to Cappadocia (Kayseri) from Kayseri Airport are available 24/7 and you can take one as you exit the Airport Terminal. Approach the taxi ranks and ride a taxi to Kayseri city centre or follow your assigned prebooked Cappadocia airport taxi driver to your vehicle.

Choosing to transfer by taxi to the city centre of Kayseri in Cappadocia from Kayseri Erkilet Airport is a convenient transport option. Public transport is not always reliable in Cappadocia, but with a taxi you will reach your destination in a timely manner. The taxi will pick you up from the airport and take you to your exact city centre destination.

Be polite but confident with persistent taxi drivers who may try and convince you to ride with them instead of heading to the ranks. Also, taxi drivers are not authorised to give guided tours, so be sure to avoid such suggestions as well.

Book a taxi ride before your flight to make sure you pay the exact fare for the trip.
Remember to carry Turkish Liras with you to pay the taxi fare at the end of your ride.

How to get from Kayseri Airport to Cappadocia (Kayseri) by bus

The public bus option from Kayseri Erkilet Airport to Kayseri city centre in the Cappadocia region is a very affordable transport option. Bus 100, as well as more buses, leave the Airport Monday to Sunday 6.40am – 11.30pm. Bus service 100 is more frequent Monday to Saturday with buses leaving every 30 minutes on average, whereas it leaves the Airport every 60 minutes on Sundays. Tickets cost less than €1 (6.6TL) and journey duration is 25 minutes in non-peak times. You can buy a Kayseri public transport card at the airport, before boarding the bus.

How much is the bus from Kayseri Airport to the city centre of Kayseri in Cappadocia?

The city centre of Kayseri in the Cappadocia region of Turkey can be reached via the public bus network starting from Kayseri Airport. A single ticket to board the bus is around €1 (6.6TL).

Information about times of bus departure is not easily accessible online if you don't speak Turkish. You can ask the airport or hotel for more details if you are unsure.

Buses to Cappadocia (Kayseri) from ASR Airport leave Monday to Sunday 6.40am - 11.30pm, with reduced service on Sundays.

You can get the public bus to Cappadocia (Kayseri) as soon as you exit the airport terminal. Follow the signs to Exit and Buses and you will reach the Airport bus stop where all public buses stop to pick up passengers to Cappadocia.

The public bus option to the city centre of Kayseri in Cappadocia is not the most convenient one. Public buses do not always follow the timetable and you might end up waiting for longer than expected. Also, getting from the city centre bus stop to your hotel or final destination can prove tricky if you’re unfamiliar with the region of Cappadocia or a stranger to the Turkish language.

If your flight is scheduled to land on a Sunday or during any night of the week, it is worth considering the taxi option as there are few or no buses operating.
Search for your final destination before getting on a public bus to make sure the distance from the bus stop to your desired location is feasible on foot.

How much is the shuttle bus from Kayseri Airport to the city centre of Kayseri in Cappadocia?

The shuttle bus ticket to Cappadocia (Kayseri) from ASR Airport is €2 (12TL) per passenger for a single ride. Contact the shuttle bus company of your choice via email to arrange pick up time and payment.

*Waiting time can vary a lot and can exceed 1 or 2 hours if your flight is late or you land at non-peak times of the day.

Shuttle bus routes are arranged upon demand at Kayseri Airport. They are mostly available 5am to 11.30pm, but this is not a standardised timetable.

You can take the shuttle bus to Cappadocia (Kayseri) from the airport of Kayseri. The prebooked shuttle bus will be waiting for you and your fellow passengers outside the Arrivals area of the airport.

Taking a shuttle bus to the city of Kayseri in Cappadocia from Kayseri Erkilet Airport is not a very convenient transport option. Shuttle buses do not have a regular schedule and they only run based on passenger demand. You will not be able to board a shuttle bus unless you have prerequested the service before your flight. Even in this case, you may have to wait for long hours before your shuttle bus arrives to pick you up.

It is not allowed for passngers who have not booked a shuttle bus service to board a shuttle bus to Cappadocia (Kayseri). Even if the shuttle bus driver prompts you to do so, you should not engage with the service.

It is worth checking with your hotel about a free shuttle bus service. Some hotels offer this service for free or for a low fee. 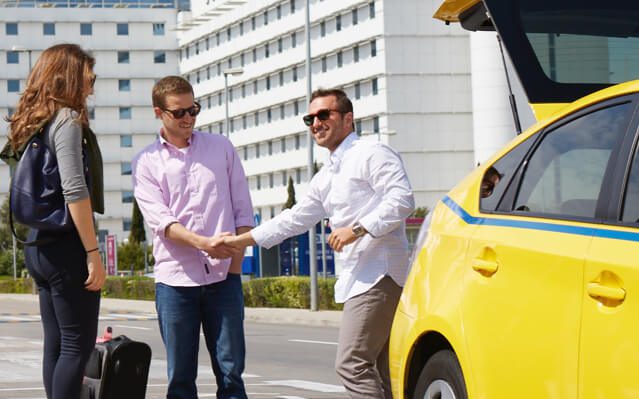 If you feel more relaxed knowing that somebody is waiting for you, you may as well book a Welcome Pickups transfer. As soon as you arrive at the airport you will be greeted by your driver. He will be waiting for you at the terminal of your arrival with a sign that has your name on it. Your driver will help you out with your luggage and together you will make your way to the vehicle. While he is driving you to your accommodation, the driver can give you some tips and recommendations on what to do during your holidays in Cappadocia. Our drivers are hand-picked and speak fluent English. No need to worry about miscommunication issues that you may face with the local taxi drivers regarding your destination. Relax and enjoy your ride.

Which airport is closest to Cappadocia?

Cappadocia is a large historical region in Turkey that encompasses many cities and towns. Depending on your Cappadocia destination you may want to book a flight for Kayseri Erkilet Airport or Nevsehir Airport.

Is there Uber in Cappadocia?

Uber is not authorised to operate in Cappadocia and you won’t be able to ride with Uber.

How far is Kayseri from Cappadocia?

Kayseri is a city that belongs to the historical region of Cappadocia. The distance between Kayseri and Goreme, a popular Cappadocia destination, is 71km.

The best way to arrive in Cappadocia

Cappadocia Taxi - Prices and Useful Tips for Taxis in Cappadocia