Moscow Domodedovo Airport offers three means of transportation to the city centre of Moscow. Domodedovo airport taxis are considered the fastest option to the city centre. The total travel distance is 45km and a ride can range from 50 minutes to 1 hour and 30 minutes depending on traffic conditions. Most taxi companies charge a fixed rate of around 22€ from Domodedovo Airport to downtown Moscow. Although there is no direct public transit to the city centre, alternative transportation options such as the express bus and Aeroexpress train can be used to connect with Moscow's green metro line, which passes through the city's downtown district. The bus+metro journey takes around 1 hour and 30 minutes and the train+metro around 1 hour. Tickets cost 1.50€ and 7€ respectively. Welcome Pickups offers meet and greet services and a friendly introduction to Moscow at the same price as a regular taxi. Click here to see the cost.

Welcome Pickups has a Net Safety Score of 96 of 100

Due to the heavily privatized taxi industry of Moscow, the taxi ranks at Domodedovo Airport offer a wide variety of vehicles to accommodate any group of travelers. Regardless of their organization all taxis are yellow and carry the distinctive black and yellow roof sign. Make sure to avoid unlicensed drivers who might approach you at the terminals as you come out because they will charge you excessively. Lastly, the trip to the city of Moscow costs around 22€ and the total ride should take around 1 hour under normal traffic conditions.

All licensed Domodedovo airport taxis from Domodedovo airport operate under flat rates. Although the price to the centre of Moscow might vary among companies, the average fare for a 4 passenger economy car is around 22€. The cost further increases for luxury or XL vehicles.

Taxis from Domodedovo Airport are considered the most comfortable travel option to the centre of Moscow. Furthermore, the ride ensures safety, personal drop-offs as well as a 24/7 service.

Avoid people that will approach you offering rides once you exit the customs since most of them are unlicensed drivers trying to overcharge travelers.

Inform the taxi staff inside the airport for any special requests that you might have since the drivers usually speak only Russian.
Booking your taxi in advance is a good idea in order to avoid waiting in queue lines at the taxi desks.

Although, there are no direct bus routes connecting Domodedovo Airport with the centre of Moscow, the Express and Shuttle buses offer connections to Domodedovskaya Metro Station which heads directly to the downtown district of Moscow. The two buses are available every 15 minutes from the airport, with a common ticket price of 1.70€. Finally, the combined travel duration is around 1 hour and 30 minutes with both buses.

How much is the bus from Moscow airport to city centre?

The price for both bus tickets is 1.70€ which also contains the connection to the metro line heading to city. Tickets can be purchased from machines inside the airport or directly from the driver.

Both bus stations for the Express and shuttle are located right outside the second exit (Ext No. 2) of the arrival terminal.

Although the airport buses are easily the cheapest transportation method to the centre of Moscow, the trip can be quite uncomfortable due to limited luggage space, lengthy travel time and lack of security.

When buying a bus ticket from the airport, make sure that it contains the connecting boarding to the metro line.

Although there is no official timetable for the two buses, their arrival and departure times are very consistent from the airport (every 15 minutes).
Make sure to ask for directions or general information inside the airport because it is unlikely that the bus driver will be able to speak English.

The Aeroexpress train is considered the best value for money mean of transportation to the city centre of Moscow. The train departs from Domodedovo airport every 30 minutes and heads directly to the central Paveletskaya metro station in approximately 45 minutes. The ticket prices range from 7€ to 15€ depending on the travel class.

How much is the train from Moscow airport to city centre?

Waiting time for the Aeroexpress train is 30 minutes.

The Aeroexpress trains operate from 5am until 12am.

The platform for Aeroexpress trains is opposite to the exit (Ext No4) from the domestic flights arrival hall. Tickets for the trains can be purchased from vending machines inside the airport, as well as from the ticket desk next to the train platform.

Considering Moscow's daily heavy-traffic levels, Aeroexpress is considered one of the fastest and most comfortable travel methods to the heart of Moscow. On the other hand, the train stops only in one station, forcing most people to further connections on the green metro line.

It is recommended to always purchase your train ticket with the addition of 1 metro connection since Aeroexpress stops at Paveletskaya metro station, which is directly connected to major downtown sights of the city.

People traveling in groups or families should purchase the corresponding group tickets for better prices per person.
Tickets can also be bought from the official Aeroexpress website, which offers great customized choices. 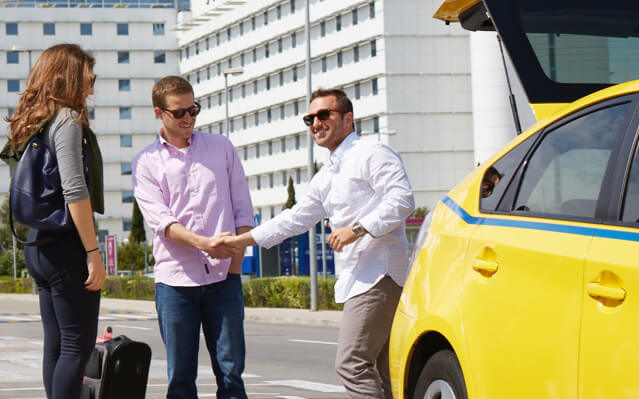 If you feel more relaxed knowing that somebody is waiting for you, you may as well book a Welcome Pickups transfer. As soon as you arrive at the airport you will be greeted by your driver. He will be waiting for you at the terminal of your arrival with a sign that has your name on it. Your driver will help you out with your luggage and together you will make your way to the vehicle. While he is driving you to your accommodation, the driver can give you some tips and recommendations on what to do during your holidays in Moscow. Our drivers are hand-picked and speak fluent English. No need to worry about miscommunication issues that you may face with the local taxi drivers regarding your destination. Relax and enjoy your ride.

€43
Same price as a regular taxi from the line

How much is a taxi from Domodedovo airport to city centre?

The average taxi fare from Moscow Domodedovo Airport to the city centre is 22€. Private taxi companies offer prices at flat rates, thus you do not have to worry about Moscow's traffic jams.

How much is a bus ticket from Domodedovo airport to city centre?

Bus tickets including a connecting line to the metro station cost 1.70€. Tickets can be purchased from machines inside the airport or directly from the driver.

How much does the train from Domodedovo airport to city center cost?

How far is it from Domodedovo airport to the city centre?

The distance from the airport to the city centre of Moscow is around 45km. The total trip with a car usually takes around 1 hour.

The best way to arrive in Athens