Nuremberg is among the largest cities in Germany and its airport serves millions of travellers every year. There are different transportation options to make your way from Nuremberg Airport to the city centre so you can choose the one that best matches your needs. The most comfortable option is to pre-book an airport taxi and have a driver take you directly to your hotel or apartment. Alternatively, you can reach the city by using public transport; there are both bus lines and a metro line but neither of those options is as convenient as a taxi, although they do come at a lower cost.

Welcome Pickups offers meet and greet services and a friendly introduction to Nuremberg at the same price as a regular taxi. Click here to see the cost.

Getting from Nuremberg Airport to Nuremberg by taxi guarantees you’ll reach your hotel or any other destination quickly and comfortably. Taxis are available 24/7 all year long and the journey takes approximately 20 minutes in light traffic. With many different vehicle types to choose from, Nuremberg Airport taxis are a great choice both for small and larger groups.

Nuremberg Airport taxi fares are calculated based on the total kilometres driven by using a taximeter during the ride. Nuremberg Airport is located about 8 kilometres north of the city centre and the average price for a standard taxi for up to 4 passengers is about €20. Note that there can be additional charges for ordering a taxi over the phone or for large pieces of luggage. *Prices may vary unless you book a taxi in advance.

Taxis are available 24/7 at Nuremberg Airport.

Where do I get a taxi from?

There is an official taxi rank right outside the main terminal building at Nuremberg Airport. You’ll find licensed drivers there 24/7 so avoid taking a taxi that it’s not lined up.

If you’re looking for the most convenient transportation from Nuremberg Airport to the city centre, taking an airport taxi is undoubtedly it; especially if you’re travelling with toddlers. You’ll reach your destination in the comfort of your own private vehicle and get there directly without getting cramped or changing metro or bus lines.

Even though getting from Nuremberg Airport to the city centre by taxi is the most costly option, it's still worth it if you prefer to travel in comfort. Public transportation might be a cheaper alternative but keep in mind that during peak times both the metro and the buses can get quite crowded.

Not all taxi drivers in Nuremberg speak English, so it’s best to have your address written down in the local language.
When you enter the taxi, make sure that the driver sets the taximeter to the base fare of €3.70 before you start your ride.
Not all taxis accept card payments so make sure to have some cash on you.
At the end of the ride, ask the driver for the receipt; this will help in case of any forgotten items or if you face any issues.

Getting from Nuremberg Airport to Nuremberg by metro is the fastest transportation option. In about 13 minutes, metro line U2 will take you very close to the city centre; depending on the exact location of your hotel or apartment, you can switch to line U1 to go downtown.

How much is the metro ticket from Nuremberg Airport to the city centre?

Nuremberg is divided into zones and a single ticket to get from Nuremberg Airport to the city centre costs €3.20 if purchased from a vending machine or €2.75 if purchased online. There are different ticket types and discounts so make sure to choose the best fare. The price refers to a single ticket bought at a vending machine.

Where do I get the metro from?

You can reach the Nürnberg Flughafen metro station easily by following the signs once you reach the arrivals hall. It’s located underground, near the exit of the airport building so you’ll need to use the stairs or take the elevator.

Taking the metro to get from Nuremberg Airport to the city is the fastest transportation option, which makes it very convenient if you’re in a hurry. That and the ticket price, which is rather low, make it a great choice for solo travellers or small groups. Keep in mind, though, that the closer you get to the city, the busier it gets, U2 metro line serves thousands of locals daily as well. If you’re travelling with many pieces of luggage or with young children, it can get quite uncomfortable so booking an airport taxi or private vehicle might be a better option.

If you're travelling alone or with a small group of people and you carry light luggage, taking the metro is the most value-for-money transportation option to reach the city. Note, however, that during peak times, it can get very crowded.

Children between 6 and 14 years travel at a reduced fare.
You can purchase metro tickets both online and at vending machines. Buying them online, however, costs less.
The metro schedule might differ depending on the day of the week or any public holidays.
The metro in Nuremberg is fully accessible to all types of wheelchairs.

Nuremberg Airport is connected to the city centre and other nearby destinations by city buses. Currently, there is only one direct line to Nuremberg, bus line N12, which operates only during the nighttime. If you wish to reach the city centre using only the bus, you can take bus line 30, which will take you to Nordostbahnhof, and from there take line 46, which will take you to Nuremberg city centre.

How much is the bus from Nuremberg Airport to the city centre? 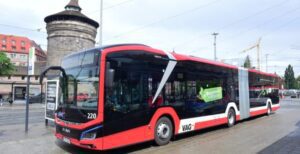 The price refers to a single ticket bought at a vending machine or from the bus driver.

Where do I get the bus from?

You’ll find the bus stop “Flughafen” near the main airport building, next to the metro stairs. There, you’ll find an information board with a timetable for each bus line.

Taking the bus to get from Nuremberg Airport to the city is another budget-friendly option but it’s not so convenient. The night line N12 is a great choice if your flight arrives after midnight as it will take you straight to the city centre but even that runs only four times per day. To avoid long wait times, it’s best to book your airport taxi in advance and know that you’ll have a driver waiting for you no matter what time you arrive.

Timetable from Nuremberg Airport to Nordostbahnhof

The bus ticket costs the same as the metro ticket but it's slower and runs fewer times during the day. However, if you're arriving at Nuremberg Airport after midnight, bus line N12 is a great choice if you're looking for a budget-friendly transportation option.

All bus lines that start with the letter "N", are night lines, operating only after midnight.
You can purchase bus tickets at vending machines, online or from the driver.
Tickets bought online cost less (€2.75) than tickets bought at vending machines or from the driver (€3.20).
Children between 6 and 14 years travel at a reduced fare.
The majority of city buses are wheelchair accessible; just make sure to use the middle door.

How far is Nuremberg airport from the city centre?

Nuremberg Airport is located about 8 kilometres north of the city centre so it’s relatively easy to reach by different means of transport. By car or taxi, it’s only a 20-minute ride in light traffic.

What’s the cost of a taxi from Nuremberg airport to the city centre?

Nuremberg taxis are equipped with a taximeter and the total price is calculated based on the total kilometres driven. The average price for a standard taxi for up to 4 passengers is about €20, but keep in mind that there can be additional charges for ordering a taxi over the phone or for large pieces of luggage.

How do I get from Nuremberg airport to the city centre?

Nuremberg Airport is very well connected to the city centre. The most comfortable transportation option is to get there by taxi. Alternatively, you can take the N12 bus line if you’re arriving late at night or the U2 metro line.

The best way to arrive in Nuremberg

Nuremberg Taxi - Prices and Useful Tips for Taxis in Nuremberg